When Water Makes it Worse

Earlier this year the Centers for Disease Control put out guidance to avoid washing raw chicken before cooking. This was met with widespread skepticism, as many families had been washing their chicken for generations as a matter of course 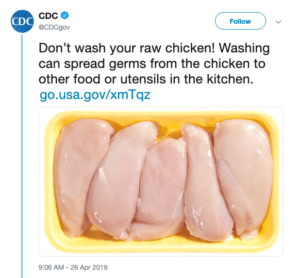 However, the CDC had very good reasoning – washing raw chicken can aerosolize harmful bacteria such as Salmonella and spread it across the counters, dishes, and utensils in your kitchen. Even a single tiny airborne water droplet can contain thousands of disease –causing bacteria.

Anyone who has sprayed a fire hose or pressure washer has seen and felt the mist that comes up and is familiar with aerosolization.

Aerosolization is the process of converting a solid or liquid substance into particles that are small and light enough to be carried on the air. Unlike vaporization the substances do not change their physical state to gas, however an aerosol made up of tiny liquid or solid particles can present some of the same challenges to the HAZMAT responder as a gaseous vapor. Aerosols can require different selection of PPE suits and respiratory protection, extensions of minimum safe standoff distances, and changes to where and how decontamination is conducted.

Just like spreading tiny bacteria laden water droplets from raw chicken, decontamination by using traditional methods that rely on spraying water can greatly increase the chances of spreading contamination. In fact, using the wrong kind of decontamination can turn a stable or contained solid or liquid hazard into a far more dangerous airborne threat.

New guidance from the US Department of Health and Human Services recommends using a dry absorbent wipe as the first step to safely remove bulk contamination. Besides being faster and easier to implement, dry gross decon is just as effective as water while posing a much lower risk of cross contamination. For responders in PPE, a low volume solution like Dahlgren Decon can then be applied to neutralize most chemical threats. 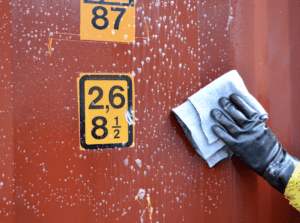 Enhanced using an electrostatic sprayer, Dahlgren Decon is applied as a very low volume, low pressure mist that attaches to the contaminant and prevents aerosolization. The application process is more like painting with an airbrush to evenly coat and contain the contamination, versus blasting it off with a pressure washer with all the previously mentioned risks of cross-contamination. The neutralized material can then be safely rinsed or wiped off as a final clean-up step prior to PPE removal.

How Do You Clean the Lock Up?
Scroll to top
Get Started