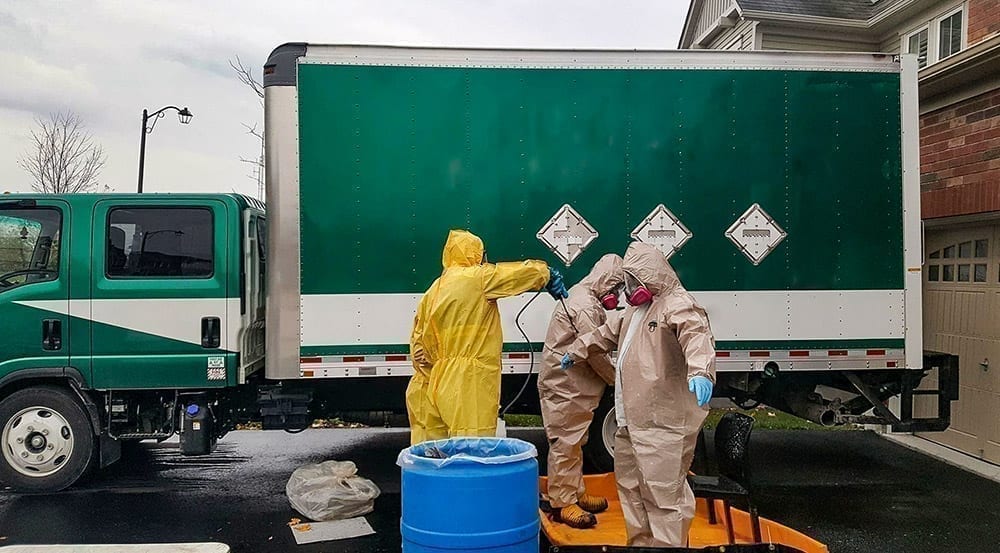 An Interview with Chris Andrews of Canadian Decon Solutions

Chris Andrews is the president of Canadian Decon Solutions, a company founded in 2017 primarily to import and resell First Line Technology decontamination products in Canada.

Shortly after opening, Canadian Decon Solutions began to receive requests for service from law enforcement and first responders to provide remediation for police vehicles, interview rooms, and holding cells that had been contaminated with Fentanyl or other synthetic opioids. In early 2018, the company began to receive additional requests from private insurance companies, property owners, and commercial businesses.

An example of a common call received by Canadian Decon Solutions is an overdose in a business bathroom.  Police, Fire, and EMS show up for the emergency response but only take what is necessary for evidence.  After evidence is collected, leftover syringes or powder on countertops and toilet paper dispensers may be left behind.  At that point, Canadian Decon Solutions is engaged to remediate the bathroom so that it is safe for customer use and may be reopened.

Chris Andrews’ expertise and experience with Hybrid Decontamination using Dahlgren Decon and FiberTect has enabled Canadian Decon Solutions to become the preferred provider of remediation services for many federal, provincial, tribal, and local government departments, as well as insurance companies and commercial businesses.

In this exclusive interview, Corey Collings, a training specialist with the First Line Utilization Academy, asks Chris to explain the process they use.

Collings: Chris, thanks for taking the time to share your insights with us. Can you walk us through one of your recent drug lab remediation deployments?

Andrews: Sure, Corey. Recently there was a house east of Toronto where the local Fire Department responded to a Carbon Monoxide alarm.  While investigating they found a drug processing and tableting set-up in a room in the basement.  Law enforcement was contacted and 42 kg of Carfentanil was recovered from the house.

Collings: How did you become involved?

Andrews: The public health department put a “Do Not Occupy” notice on the property so that nobody can occupy the property until it is decontaminated and properly remediated.  Because Carfentanil was so new, nobody else in the area knew how to handle the remediation or had the right technology.

Collings: Can you describe the drug processing area?

Andrews: It was a room in the basement that was approximately 20 feet by 10 feet with a reinforced door.  There were at least two pill presses and a large amount of powder, both Carfentanil and cutting agents like caffeine.  He [the homeowner] had sealed the HVAC vents and return air with plastic.

Collings: Can you walk me through your response? 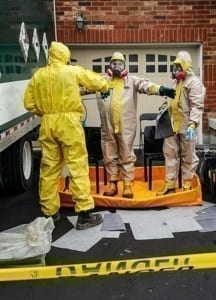 Andrews: We responded about 3 to 4 weeks after the initial law enforcement response.  The utilities to the house had all been turned off.  We had a total of 8 personnel on the team, two on entry, two for RIT [Rapid Intervention Team], two for decon, an industrial hygienist, and a consultant.

After setting up decon with Dahlgren Decon and FiberTect, we made initial entry in non-encapsulated Level B because of concerns about Carbon Monoxide and oxygen levels in the house.  The initial entry was just a visual inspection and to sample air quality.  Law enforcement had taken most of the items out of the basement room but there were empty pans, totes, dye for coloring the pills, and visible powder on surfaces, including the walls.  We also used a GoPro to document everything.  We then egressed through decon.

Because all the air samples showed that there was enough oxygen, we then switched to full-face APRs with Organic Vapor / Acid Gas cartridges and re-entered to take samples.

The homeowner was the one who was running the drug operation in the basement, but also had a tenant with a child who lived upstairs.  We sampled all floors of the house, including the furnace and HVAC system.  We also left battery powered particulate air samplers in the house on each floor.  We then egressed again through decon and secured the house.

It was an approximately 2,500 square foot house with two stories and a full finished basement.  Sampling from the main floor and upper floor came back clear.  There was contamination present throughout the basement.

After the samples returned positive for carfentanil in the basement, we developed a remediation plan.

Collings: How did you determine how much Dahlgren to use for the remediation?

Andrews: We consulted with First Line Technology and determined that a gallon of Dahlgren Decon would be sufficient to remediate the approximately 1,400 square foot basement.

Andrews: It was fairly empty but finished with painted drywall, laminate flooring, a bathroom, and furnace room.

Collings: How did you set up decon prior to conducting remediation?

Andrews: We took the basement door off and hung plastic sheeting across the door frame and on the walls at the top of the basement stairs and set up decon there.  We had a safety guy standing by with nasal spray naloxone and two loaded naloxone syringes.  We also had a SKED for emergency evacuation.  The electricity was off in the house and it was December, so it was quite cold inside, close to freezing, but we had no issues with mixing Dahlgren Decon.

Collings: How did you conduct the remediation?

Andrews: First, we removed the trim from the walls and all the electrical outlet and switch covers.  We HEPA vacuumed any visible powder, including the drywall dust that was behind the removed covers.  We don’t want someone coming into the house later and removing the covers and being concerned about the “white powder” drywall dust.

I then used full strength Dahlgren Decon and a handheld MG200 electrostatic sprayer.  I sprayed Dahlgren Decon on all surfaces and let it sit overnight.  We then cleaned the walls and floors off using mops, rags, and clean water.

Collings: How did you handle outlets, drains, HVAC, etc.?

Andrews: We washed the outlet covers in Dahlgren Decon in the sink.  All drains were treated with Dahlgren Decon by pouring it down the drain and letting it sit.  Even though the HVAC system tested clean, we removed the filter and turned the fan on and sprayed Dahlgren Decon directly into the intake.

Collings: How long did it take?

Andrews: The entire remediation took about a week.  The applying of Dahlgren Decon took only about an hour.

Collings: Was there anything you didn’t apply Dahlgren to?

Andrews: No, we applied it to every surface – ceilings, walls, floors.  There was no damage to any of the flooring, paint or walls.

Collings: What about doorknobs and other metal fittings?  Was there any discoloration?

Andrews: There was no discoloration.  Dahlgren Decon did not damage or discolor anything in the house.

Collings: What about carpets?

Andrews: The only carpet was on the basement steps.  We applied Dahlgren Decon to the carpet and let it sit overnight, then cleaned the carpet with a high-temp carpet extractor, then we removed the underpadding and carpet and disposed of it as non-hazardous waste.

Collings: How do you handle household appliances?

Collings: Did you have any issues with the battery powered sprayers?

Andrews: No, the batteries last the entire job.  I have sprayed over an hour straight on a backpack sprayer battery with no issues.  I did this house with a handheld sprayer and switched to a backpack sprayer afterwards because of the larger tank size and it is better for spraying above your head.  It also much nicer not dragging a cord like using a fogger.

Collings: What are some lessons that you have learned from using Dahlgren Decon for fentanyl remediation?

Andrews: I now dilute Dahlgren Decon to about one part Dahlgren to five parts water.  I have found it is as effective and the cleanup is much easier.  I would still use full strength Dahlgren Decon on areas like the basement that had visible powder on the walls but diluted for the rest of the house.

Collings: What sort of equipment do you use for fentanyl remediation?

Andrews: We use Dahlgren Decon, electrostatic sprayers – both the handheld MG200 and backpack MG300, FiberTect for emergency response and personnel decontamination, and the Enhanced Decon System to decon personnel.

Collings: How are you using the EDS?

Andrews: We use the EDS6 as our standard personnel decontamination for white powder calls with great success.

We have found that in many commercial buildings the entry way has two sets of doors, a set of exterior doors and then a space between them and the interior doors.  These often have glass walls, tile floors, and its perfect to set up the EDS.

Sometimes we do decon outside but a lot of times we are being asked for a low-profile response and we are more contained in an entranceway.

Collings: How about detection?  How do you prove to your customers that the site is clean?

Andrews: We work with third-party Industrial Hygienists and take multiple samples.  However, those samples take a week to provide results and in many businesses or restaurants they cannot have a bathroom or other area shut down for a week.  So, we also use the Smith’s IonScan 600 Ion Mobility Spectrometer and more recently the 908 Devices MX908 High Pressure Mass Spectrometer to get nearly instant results so that the areas can be reopened to the public.

Collings: Chris, thanks for sharing your process and insights from using the Hybrid Decon process utilizing Dahlgren Decon and FiberTect wipes to remediate these types of incidents. I know this information will help other remediation companies and HazMat teams to have more confidence in tackling big jobs like this.

Corey Collings, First Line Technology’s Training Specialist and Co-Founder of First Line Utilization Academy, has 15 years of experience in the US Army, National Guard, and law enforcement specializing in explosives, CBRN, and dangerous drugs. With a  Bachelors of Arts degree in Homeland Security and Emergency Preparedness from Virginia Commonwealth University, Corey, on behalf of First Line Technology,  provides training and development of evolving tactics, techniques, and procedures in CBRNE/HazMat and Emergency Response based on the latest decontamination technology.

Is Evacuation of Vulnerable Citizens Our Achilles Heel?
Scroll to top
Get Started