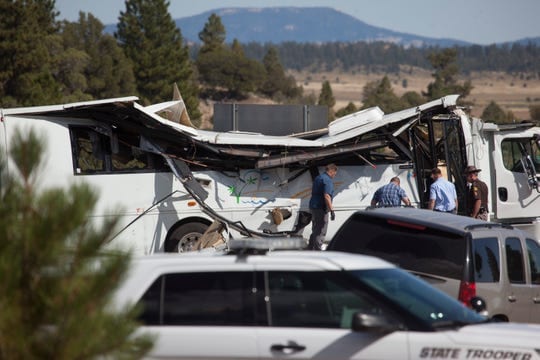 In September of 2019, a tour bus carrying 30 Chinese nationals traveling to Bryce Canyon National Park rolled over and crashed into a guard rail. Four people died and at least twelve other people with injuries that ranged from serious to critical.

“A National Highway Traffic Safety Administration (NHTSA) study published in 2005 found that nearly 60 percent of fatal crashes occurred on rural roads, despite the fact that rural roads incur only 39 percent of the total vehicle miles traveled and less than 20 percent of the US population lives in rural areas. The frequency of fatal crashes involving large buses, often referred to as motorcoaches, was documented through the NHTSA Fatal Accident Reporting System (FARS) as occurring an average of 137 times a year during the period from 2000 to 2007, with less than 25 percent of these occurring in rural areas. Despite comprising less than a quarter of those fatal crashes, the rural incidents accounted for 56 percent of the fatalities and 72 percent of the non-fatally injured victims.”
(NASEMSO Rural Highway Mass Casualty Guidelines, November 2011)

There are a multitude of factors contributing to the disparity in casualty figures between rural and urban area bus crashes. EMS system subject matter experts assert that rural areas of the United States suffer from a lack of adequate prehospital response capacity.

In many rural areas, few ambulances are available to respond at any given time due to limited funding and qualified staffing. Ambulances may have to travel many miles to reach the scene over difficult terrain and in bad weather.

Open reaching the scene, there are not enough qualified EMTs and doctors to handle triage and immediate care for all the victims. With not enough ambulances available, patients may be waiting by the side of the road for extended periods of time.

While grant funds to rural areas such as the Supporting and Improving Rural EMS Needs (SIREN) Act are available, the funding levels are inadequate for most jurisdictions to purchase, equip, and staff a turnkey, custom-build Medical Ambulance Bus (MAB) to serve as a mobile treatment center. These special purpose vehicles can cost between $500,000 and $1,000,000.

Some rural communities have begun to adopt innovative solutions to improve their prehospital triage, treatment, and transport capabilities.

Utilizing a surplus school or metro bus, and a bus stretcher conversion kit like the AmbuBus developed by First Line Technology, they can deploy a multiple patient transport vehicle at the Basic Lifesaving (BLS) level that can accommodate 12 supine patients for under $50,000.

With an ALS equipped AmbuBus and easy to deploy MCI Blocks, rural EMS units can greatly improve their response to mass casualty incidents.

To see the original article on the Bryce Canyon bus crash, click here.

Remediating a Residential Fentanyl Lab
Scroll to top
Get Started