As a recruiter or hiring manager, you’re looking for a candidate who is a team player, motivated, and eager to be successful. Even just two of those traits would make you happy. Where do you go to look for candidates? Online resumes sites, LinkedIn, your network? All of those sources can yield great candidates but you spend a lot of time sorting through resumes that don’t meet your standards. Have you considered veterans?

According to the Bureau of Labor Statistics, 5.8% of Gulf War-era II Veterans were unemployed in 2015. While it is continuing to decline, there is still a market of highly qualified military veterans who are unemployed and searching for full-time employment. Veterans are leaving the military with strong leadership and problem solving skills. These are critical assets in modern day dynamic companies. 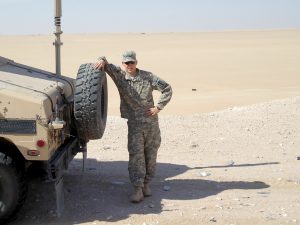 Sergeant Michael Corle felt called to serve in 2010 when he observed his friends preparing to deploy overseas. He enlisted in January 2010 and began training as an Automated Field Artillery Tactical Data Systems Specialist. SGT. Corle deployed in September 2010 for a tour overseas in Kuwait and Iraq. It was there that he learned critical skills to successfully accomplish the mission his unit was given.

SGT. Corle returned from deployment in September of 2011 and continued to serve with the West Virginia Army National Guard focusing on everything from decontamination to medical triage. He credits his time serving in the military not only for the operational skills but for the ability to be a self-motivated, collaborative team member, as this was necessary while he was deployed. The life experience gained in the military gave him self-confidence to make quick clear decisions as they pertain to life and his career.

One of the key things that First Line prides itself on is being ahead of the game in product development and listening to our customers wants. Hiring a veteran of our military brings a unique perspective for that product development and interaction with customers. More importantly a Veteran’s patience and drive to meet objectives makes hiring a them the obvious choice for First Line Technology. “We are a driven company and in hiring Mike we found a mission driven manager to ensure we solve our customer’s complex problems.” Shared Mr. Kapoor, founder of First Line.

While your target audience may not be military, every company can benefit from the hard work and dedication that you’ll receive from a veteran. We thank all veterans for answering the call to serve. Now it’s our turn as hiring managers and recruiters to call them and schedule those interviews.