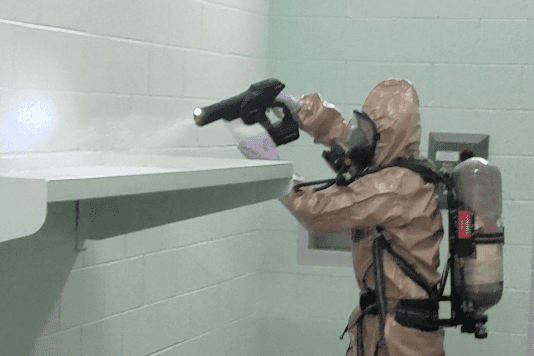 As fentanyl and other synthetic opioids continue to spread across the country, correctional facilities are discovering that prisoners are finding ways to hide or acquire these dangerous substances.

Recently, Al Lee of First Line Technology (FLT) received a phone call from Lieutenant Scott Brosis of the Aurora, Illinois Police Department. Correctional officers at the Aurora Police Department Headquarters had discovered that one of the prisoners had a stash of drugs that included heroin, meth, and fentanyl.

Concerned that the fentanyl may have contaminated the cell, they cordoned off the cell. Since they had never had to decontaminate a cell for fentanyl contamination before, they reached out to a private remediation company but were told that the firm did not decon fentanyl.

Lt. Brosis then asked Lt. Charlie Kunkel of the King County Sheriff’s Department if he knew of anyone who could assist them. Lt. Kunkel then referred him to Al Lee of FLT who had demoed our fentanyl decontamination solution there.

As Al spoke with Lt. Brosis, it became clear that since they had never dealt with fentanyl before, that someone should assist them in this first encounter.

Al offered to bring both an Electrostatic Decon Kit (EDK) and a sample of Dahlgren Decon. Al suggested that the Aurora Fire Department HazMat Team meet them at the facility so he could show them how to do the decon.

The next morning, Lt. John Ross and four other members of the Aurora HazMat team met Al and Lt Brosis at the facility. The spectrometer used by Aurora Fire Department was rather limited and could only detect up to 51% of fentanyl.

Fortunately, Al Lee had also brought a Synthetic Opioid Safety (SOS) Kit which contains BTNX Test Strips as well as the correct PPE required for small doses of fentanyl and both FiberTect Wipes and Dahlgren Decon.

Al suggested that they use the test strips to check for the presence of fentanyl. Two members of the HazMat Team donned PPE and entered the cell.

Using the tests strips, they determined that there was no fentanyl in the areas of the cell that where drugs had been found. However, to be safe, they decided to decon the cell.

Al showed them how to mix the Dahlgren Decon solution and dilute it with water for use in the Victory MG200 Electrostatic Sprayer included in the Electrostatic Decon Kit.

They sprayed the entire cell and its contents which only took a few minutes due to the efficiency of the electrostatic sprayer. At that point, they removed their PPE and disposed of everything following their department’s protocols.

“I was pleased to be able to help out,” Al said. “Once you see how easy it is to decon an area with the proper PPE, an electrostatic sprayer, and Dahlgren Decon, fentanyl isn’t a major problem anymore.”